skip to main | skip to sidebar

Hobos in the Roundhouse 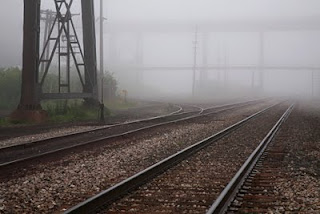 Here are the lyrics to a wonderful song from Northland singer/songwriter Bill Isles called Hobos in the Roundhouse. Bill's grandfather worked as a repairman in the roundhouse and evidently shared stories from the experience. The Depression era was a hard time that shook the nation in a variety of ways. Here's a tale that reaches to us from that previous decade from an album titled The Calling. Check it out.

Hobos in the Roundhouse

From seven to seven, every night of the week
Fixin' trains in the roundhouse, I work on my feet
And I told my children, I hope the bedbugs don't bite
And I've got hobos sleeping in the roundhouse tonight.

From Akron to Hinckley and Prairie de Chein
They are soldier and lawyers and I believe what they're sayin'
And I'll roust them at four and they'll head down the line
My hoboes sleepin' in the roundhouse tonight.

Goodnight, my hobos, rest your vagabond heads
On your old knapsack pillows in your gunnysack bed
For a few stolen hours, you'll be alright
My hobos sleepin' in the roundhouse tonight.

Well, they hired a new man to work as a guard
Every mornin' at sunrise he checks out the yard,
But for now, I don't trust him, though he seems pretty nice
'Cause I got hobos sleepin' in the roundhouse tonight.

Well, I asked my Savior, "What should I do?
If I'm caught helping hobos my job could be through."
And I heard the answer, so clear and so bright,
"Are My hobos sleeping in your roundhouse tonight"

To a large extent hobo life has been romanticized, but these people living on society's fringe had to have a thick hide and be exceedingly resourceful.

World renowned novelist Kazuo Ishiguro's life briefly intersected with the American hobo lifestyle in the early seventies when he came to America as a young man. Ishiguro, author of the novel Remains of the Day (among other significant works), reflected on this period of his life in an interview which appeared in The Paris Review in Spring 2008.

"I rode a freight train from Washington state across Idaho to Montana. I was with a guy from Minnesota, and we’d spent the night in a mission. It was a pretty sleazy place. You had to strip at the door and enter a shower with all these winos. You tiptoed your way through black puddles, and at the other end they gave you laundered nightclothes and you slept in bunks. The next morning, we went to the freight yard with these old-fashioned hobo types. They had nothing to do with the hitchhiking culture, which mostly consisted of middle-class student types and runaways. These guys traveled by freight, and they went from skid row to skid row in different cities. They lived by donating blood. They were alcoholics. They were poor and sick, and they looked awful. There was nothing romantic about them at all. But they gave us a lot of good advice. They told us, Don’t try to jump the train when it’s moving, because you’ll die. If anyone tries to get on your boxcar, just throw them off. It doesn’t matter if you think it might kill them. They’ll want to steal something and you’re stuck with them until the train stops. If you go to sleep, you’ll be flung out just because you’ve got fifty dollars." 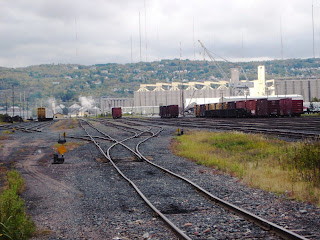 The hobo life was really a product of a certain period of time in the remote past. Its nostalgia value is much like 1950's television... something borne of a moment of convergences.

In the case of hoboes, the Great Depression served as the great catalyst. The interstate highway system was not yet developed, so the railways served that function of transporting the isolated and dislocated from one place to another. The primary vessel, and most comfortable, was the box car.
Jumping trains can be be dangerous, and the railroad companies have now attached stiff penalties to trespassers on these steel rail highways. Ribbons of concrete and asphalt replaced rairoads as the preferred method of travel, and drifters chose outstretched thumbs as the means to a lift from one place to another. People on society's fringes now seek out other pockets where they can keep warm, fed and sheltered. Here at Hobo Junction, we still have a hearth and a heart, hoping you will be warmed by it.
The image here is of a railroad yard in Connor's Point, Wisconsin. The box cars remind us of that former time where the downtrodden still had dreams, and a social net of their own to help them through.
Posted by Ed Newman at 9:57 AM No comments:

Make Yourself At Home

"I crouched quietly in the patch of tall weeds. Around me fell the shadow of the viaduct that carried a highway over the railroad yards. From the edge of the yards, I squinted as I watched the railroad cars being switched from track to track. As hard as it was for me to look at into the late summer sun, I knew nyone in the sun would have a hard time seeing me in the shade. Cars and trucks were rolling over the viaduct, but what occupied my attention was the dark cool corridor underneath it, where I hoped to intercept my train." ~Ted Conover

So begins Ted Conover's Rolling Nowehere, a book about riding the rails with America's hoboes. It seems like as good a start as any to a blog dedicated to nostalgic reminiscenses and a tribute to those who survived hard times on society's outer fringe. Welcome to Hobo Junction. We're hoping it becomes a warm hearth where you can rest a spell, dry your wet socks and shoes, and enjoy a few morsels of hope, the essential fuel of life.

Get some shuteye if you need it. The next train will be along shortly.
Posted by Ed Newman at 7:56 PM No comments: 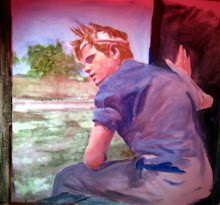